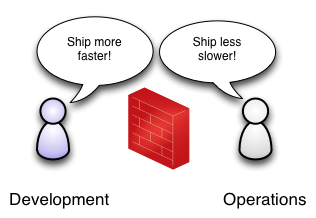 Many enterprise CIOs have struggled to make the leap of faith that DevOps is a viable solution to improving their release velocity and quality. At the same time, most DevOps practictioners are skeptical their hacker ethos could survive in the process driven culture of an enterprise. The result is the high tech odd couple of the era, with DevOps from Mars, and enterprise IT from Venus.

Unfortunately, enterprise IT needs DevOps now more than ever. Over the last decade, we have witnessed the strategic erosion of IT’s value to their businesses. This trend started with the advent of SaaS, in which providers of easy to use and fast moving services sold around corporate IT. This was augmented by outsourcing and the Great Recession, which put a further squeeze on IT budgets and their ability to compete with the rapidly growing array of alternatives. The final blow though has been the cloud, which while opening the purse strings, has resulted in a serious long term competitor.

Today’s enterprise IT is a byproduct of its multi-decade social engineering to trade off features for reliability, innovation for security, and agility for predictability. This trade off has been acceptable while there were few superior alternatives. But more and more, businesses have options. From CRM to ERP to ITOM, the corporate IT application portfolio has been slowly and steadily marching into the cloud.

DevOps offers corporate IT a way to deal itself back in the game by solving the impedance mismatch between development and operations. This mismatch has been a singular choke point of innovation in the enterprise, and one IT has struggled to solve. While there is no simple solution to managing the fine line between mitigating risk and fostering innovation, enterprise adoption of DevOps is likely to be a key component of the solution.

Comment from operations manager while diagnosing what turned out to be a networking issue on an incident management conference call: “My infrastructure works great without your software.” ;)