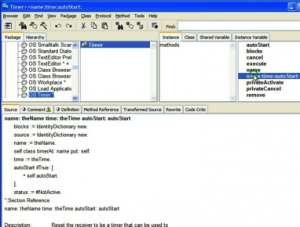 One of the often overlooked innovations from the first Scrum team was the rigorous commitment to weekly demos. This innovation came in the dark ages of waterfall, when a typical software release took a year or more and the concept of demonstrating incremental weekly progress made little sense in most organizations. But our team at Easel was different, due in large part to our commitment to a dynamic programming language, OOAD, an integrated development environment, and short / iterative release cycles.

So every week we gathered on a Friday afternoon to show what we had completed. Some demos were of end to end features, while others were code walk-throughs of common frameworks. I guess I should also note that since we were all in our early/mid-20s, these demonstrations were frequently accompanied by beverages (I particularly remember Mike Morris introducing us to cachaça ;) ) While these gatherings did not eliminate the need for the continuous informal demonstrations that occurred every day between team members, they became an opportunity for the full cross-functional team to step back and take stock of what we had produced.

Two decades later, I still believe in a rigorous commitment to weekly demos. They provide an opportunity for a fast moving team to have a planned breather, where they can both show what they have done and see what their peers are doing. It also offers an opportunity to share the knowledge acquired that week, and even to discuss potential concepts that may eventually lead to epiphanies.

Over the years, I have with varying degrees of success tried to infuse this early lesson into my teams. Taking an hour each week out of a team’s schedule may seem expensive, but when it works, it will pay you back with dividends.