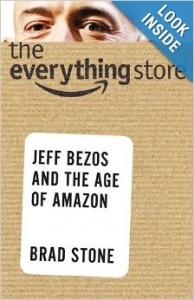 I tend to read books in themes. The topic of the last few weeks has been tech company history. Here is what is in my Kindle / Audible library.

Hatching Twitter tells the story from the start of podcasting startup Odeo through the Twitter IPO, covering the personal histories of the key participants. Any company that started from a failed business (podcasting startup Odeo), had multiple $1B+ offers to be acquired with virtually no revenue, and had four CEOs in five years, is bound to have a story. I can’t attest to the accuracy of the research, but can attest to it being a good read. Note: the author seems to have a slight bias in favor of Evan Williams.

The Everything Store: Jeff Bezos and the Age of Amazon

The tech industry has woken up over the last few years to realize a former bookseller is not only disrupting their respective markets, but doing it with mechanical efficiency. The Everything Store is the story of Jeff Bezos and Amazon, from the company founding through to the incredible success of Amazon.com and AWS. While Jeff’s wife, MacKenzie, is a little less fond of this book, I found it to be a great read. Understanding the company history goes a long way toward understanding the corporate DNA that is driving the Amazon machine.

The Facebook Effect: The Inside Story of the Company That Is Connecting the World

I know I am a little late on the Facebook theme. With the IPO behind it, Facebook is gradually declining toward irrelevance. I know more and more people getting off Facebook, and have been watching with intrigue the rise of the next generation social sites (e.g. Whisper, Snapchat). But the story of Facebook is still one for the ages. The book tells the story from the founding of The Facebook in Zuckerberg’s Harvard dorm room, to pre-IPO. It is a great read, although the author comes across as a bit of a Zuck fanboy.

Digital Wars: Apple, Google, Microsoft and the Battle for the Internet

This book delivers a scathing narrative of Microsoft’s failures from the late 1990s and 2000s, including music, search, phone and tablet computing. While the book discusses the successes of Apple and Google during the same period, it seems done primarily as a foil to the profound failings of Microsoft. I always enjoy reading case studies in disruptive innovation, so this book was an obvious choice for me. Secret confession though: a decade from now we will view the Balmer announcement as the turn of the tide for Microsoft (but the 2nd generation Surface still is a POS).

The choice of this book was a bit of desperation on my end. I like to listen to an audiobook on my walk between North Station and our offices in Fort Point, and had run out of good choices. Open tells the story of the founding of Compaq, its IPO, dominance of the PC market, and eventual acquisition by HP. The author was the CEO and founder of the company, and does a great job explaining how Compaq and open standards were critical to enabling the innovation we see today (e.g. directly links it to the iPhone and iPad). In a world dominated by Apple and its closed systems, it is a refreshing reminder of what open can enable.

In The Plex: How Google Thinks, Works, and Shapes Our Lives

In the Plex tells the story of Google, from a Stanford research project to post-IPO tech giant. There are several books out about Google, with this one being one of the better that I have read. I was in particular fascinated with the challenges of taking Google into China. It also reminded me of my surprise when a former colleague told me in 1999 he was heading to SV to work at Google. I remember thinking at the time: is there really money left in search? ;)

The Idea Factory: Bell Labs and the Great Age of American Innovation

The Idea Factory reminds us of the incredible debt we owe to Bell Labs. The story takes the reader on a journey of AT&T and their spinoff lab from the 1920s through the 1980s, including the government breakup. No matter what segment of the tech industry you work, Bell Labs has been a critical historical influence on you and your market. The most fascinating part for me was realization of the incredible complexity of a nationwide phone system in the 1920s. It makes you appreciate the foresight in the 20th century of enabling a government sanctioned monopoly.