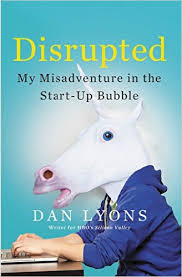 I am a voracious reader of tech nonfiction, and so it will come as no surprise that I bought Dan Lyon’s Disrupted: My Misadventure in the Start-up Bubble this week. While it was a quick and entertaining read, with all the news coverage of HubSpot’s Lord of the Flies culture and the mysterious FBI investigation, I will confess to having expected more of a juicy tell-all about a local company. Instead I struggled with one overwhelming surprise: the author’s naivety.

Bear with me while I set aside Dan Lyon’s commentary on ageism for a moment and talk about how much the author did not seem to know about working in technology.

There are several points in the book that left me wondering whether the author thought HubSpot invented the inside sales model. This model exists in almost all SaaS companies today, and his descriptions likely bear similarities to thousands of businesses around the globe. There is much discussion about how the business development reps (BDRs) that drive this model are often new or recent graduates, and that they spend all their time connecting with potential customers on the phone. Being a BDR is often the first step a person takes in the sales profession, and thus often is staffed with people in their early to mid 20s. It's not some secret conspiracy to reduce the cost of labor, but instead an entry level job in the sales profession. When I was in my early/mid 20s, I too had an entry level job in which I worked hard and was paid less than the more senior engineers around me. As much as inbound marketing has transformed our industry, most businesses still make outbound a core part of their sales strategy, and BDRs are essential to this effort.

Dan writes in great detail about how HubSpot fired underperforming salespeople. I'm not saying it's pleasant to fire people who do not meet expectations, but we all know sales is a goal-driven profession. Not everyone should be a salesperson, and not every salesperson can sell every product. This was the way sales worked when I joined the industry in the 1990s, and it is how it works today. Disrupted reads like we are uncovering a remote tribe practicing cannibalism. I'm betting if Dan had more exposure to sales at Newsweek, he'd realize how unremarkable this actually is.

The author thrashes founders and investors as charlatans focused on getting rich at the expense of the employees. If Disrupted is your introduction to the tech industry, you likely would think founders and investors are 19th century robber barons. But as an entrepreneur and tech veteran, I simply do not believe founders create companies to get rich quickly. Being an entrepreneur is one of the most irrational acts a person can perform. It requires taking great personal / professional risks, an incredible amount of hard work, and a willingness to deal with failure and rejection. And the unfortunate truth is that most startups are not successful, and most founders do not become rich - so if you became a founder to get rich quick, you likely are taking a hard road achieve your goals. I do not know Brian and Dharmesh, but I suspect there was a time when they were working 14 hour days, 7 days a week, dealing with rejection from both investors and prospective customers. Why did they do it? I'm betting they believed they were doing something that mattered - not just trying to get rich quick.

A good part of Disrupted hypothesizes that “mom and pop” investors are being duped by unprofitable tech companies that are losing money almost as fast as they are acquiring it from venture capital firms. The clear implication is that there is some Keynesian law that states that a business cannot trade off profits to gain market share. While I agree a company cannot commit to growth over profits indefinitely, there are phases, markets and economic environments in which it may make sense to drive for market share first and profits later. I’m sure there is an excess focus on growth among some companies today, but the decision of whether HubSpot was properly managing these tradeoffs requires a lot more thought and data than the author seems willing to provide.

Issue #5: Fitting in With Company Culture

The author goes to great pains to explain how he was ostracized by his twenty-something colleagues for his incredible age of 52. But he also makes clear that he believed his colleagues lacked in intellect, experience and capability, and that he did not have any commitment toward the company mission or its product. He even went out of his way to subvert his company publicly through social media and in group conversations. I totally get Dan’s struggle with company cheering comments like “Ashley for President!” - but I suspect anyone who thinks their colleagues are idiots is not likely to fit into any company.

Disrupted is an entertaining read that can make you both cringe and laugh. It raises some real issues around ageism and diversity in tech that are worthy of at least some of the attention the book has received. But when you read Disrupted, keep in mind that the author’s anthropological study is less a reflection on a single company or industry, and more about the challenges of a person who is switching careers into an industry in which he has no previous experience, and into a market in which he has no interest / passion. In the end I felt Disrupted revealed more about its author than it did about the company in which he worked.