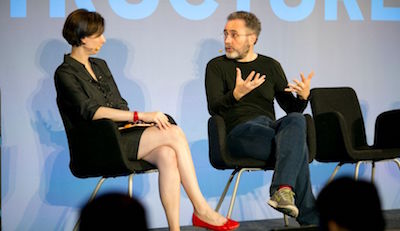 I attended Structure 2015 this week, the conference formerly sponsored by Gigaom before their untimely demise this summer. Due to the popularity of this and the two other conferences they sponsored, a small team scrambled to create a new business entity that could carry the conferences forward. This team did a great job, assembling a notable group of leaders in cloud computing, including Adrian Cockcroft, Raj Patel, Urs Holzle, and Jay Parikh. They also pulled together some great investors in the industry, including Vinod Khosla.

I must confess to not being a huge fan of conferences in general. Even the good ones can feel a lot like watching CNN, where you spend 90% of your time listening to mind numbing chatter to get to the 10% of actual information (note: my future cyborg self will absolutely not tolerate this). The successful conferences for me are the ones where the 10% is actually worthy of your time. Structure was a successful conference.

One of the highlights was Raj Patel's talk on "Why Everyone at Pinterest Is Responsible for Site Reliability”. Raj is head of cloud engineering at Pinterest, and is something of an infrastructure Yoda in our industry, having built and managed big data centers at Exodus, Yahoo, Cisco and Salesforce. The format for his talk was a fireside chat, where he and a Structure editor engaged in Q&A while seated in comfortable chairs on stage.

One of the more humorous lines of discussion was Raj claiming he believes in “infrastructure buddhism”, which requires divesting yourself of your attachment to physical infrastructure to enlighten your mind to see new ways to construct applications. Raj also espoused a philosophy of managing cloud efficiency I’ve noticed taking hold across the “cool kid” tech companies in SF/SV. The approach is to decentralize the management of infrastructure to achieve maximum agility / innovation, but to centralize its governance. This means product teams at Pinterest have full authority to manage their cloud infrastructure, but are watched over by a team that provides them guidance and recommendations. This is a great forward-thinking model for enterprise IT to adopt to reign in the last decade of Shadow IT. Raj said the goal at Pinterest was to “pivot for velocity” to enable “great innovation.”

Adrian Cockcroft, technology fellow at Battery Ventures and former cloud architect at Netflix, also had an interesting talk. His "State of the Cloud and Container Ecosystem" was one of the more engaging presentations of the conference, and in spite of its title, spent less time talking about containers than most. To my great surprise he was the only person to even mention what I believe to be the single greatest innovation going on in cloud computing right now: serverless applications.

Adrian presented the enterprise cloud adoption cycle (i.e. ignore, ignore, ignore, no, no damnit, oh no, oh sh*t, adoption). He claimed 2015 was a big year for the cloud, with “serious deployments underway” that are focused on “shutting down data centers.” He was bullish on the overall container market, and said Docker “wants to be the new VMware.” He gave some kudos to Microsoft for its embrace of Linux and open source, but then talked about how Amazon is going to be incredibly hard for anyone to catch. The highlight of his talk was its closing, where he presented a series of slides of ships in various states of sinking as a metaphor for the disruption happening among the enterprise infrastructure players. The discussion went as follows: 1st slide - “Dell is a sinking ship that turned itself into a submarine by going private”; 2nd slide - “EMC is a sinking ship that decided to merge with the Dell submarine”; 3rd slide - “HP is a sinking ship that split itself in two in hopes of sinking slower.”

Intel was one of the key sponsors of the conference, as they are at many of the cloud events these days. Listening to Intel executives at cloud conferences can sort of feel like inviting a glass manufacturer to Apple WWDC. While I know they make make something important inside the infrastructure, it’s one I really like to ignore and take for granted. But Diane Bryant, Intel SVP & GM, did use a phrase I hadn't heard: the "Cloud Super 7". This group consists of the biggest users of infrastructure in the world: Facebook, Google, Microsoft, Amazon, Baidu, Alibaba and Tencent. While its obvious all are key customers of Intel, it's also worth noting three on this list have previously mentioned they might develop their own chips in the future.

Another interesting talk was with Urs Holzle, SVP of infrastructure at Google (note: I notice everyone adds the obligatory “and 8th employee at Google” every time they mention him; I think he might have had a legal name change to include this). His interview was done by Fortune’s Stacey Higginbotham, who had a very pointed line of questioning. Urs said that Google is committed to the enterprise cloud, and fully expects cloud revenue to exceed search in the future. He denied that Google is underperforming in the cloud, repeated the mantra that we are still very early in this market, and suggested that Microsoft’s misreporting of its SaaS revenue as cloud is making them look further behind than they are. He also alluded to some upcoming “big announcements” that will “show how serious we are” about the cloud. You could tell there was discomfort on his part at several points in the interview, which felt appropriate since Google has definitely underperformed in an emerging industry they should entirely own. Henry Ford said that if he listened to his customers he would have given them a faster horse instead of a car. Sometimes I think that if Henry Ford applied the Google “moonshot” philosophy, he would have tried to sell them a jetpack when all they were ready to accept was a car.

I also had a good laugh at Vinod Khosla’s fireside chat: “What Past Lessons Teach Us About the Cloud’s Future.” As the co-founder of Sun Microsystems and long time venture capitalist legend, he’s like a wise grandfather of Silicon Valley. He claimed the cloud is going to disrupt all the major legacy infrastructure players, saying IBM, Cisco, Dell and EMC can be renamed “F**kedByTheCloud.com.” He also derided Hadoop as an old solution to a new problem (“I thought we got rid of batch in the 1980s”). And finally he asked everyone in the audience who was in a startup. When not many hands went up, he cried: “Not enough! The rest of you: what are you doing?”

I had only two disappointments in the conference: 1) where was Amazon, and 2) did we really have to talk about containers so much? I’ll start with Amazon. They are clearly the 800 pound gorilla in cloud computing, and while AWS came up in several of the talks, no one from the company was at the event. Okay now for containers. As the CTO of a company with actual production workloads running on Docker, I am at a loss to explain why everyone is so hyped about containers. Most of the talks about containers focused on their potential to solve big problems, but few provided real-world uses cases where their disruptive potential was realized. Don’t get me wrong: containers are great. But infrastructure as code was a revolution; containers by comparison are incremental.

My week in San Francisco ended with an eventful flight, since I was a passenger on the United SFO to BOS plane that was delayed 6 hours by a security incident. Governor Chris Christie was on our plane, making what might have been a not entirely rare United delay newsworthy. I still don't know exactly what happened, but after three hours on the runway we turned around due to an “operational issue” (although the United app said: "security screening disruption"). We were then taken off the plane five at time, passing through an array of police officers and a security team that checked our hands for bomb residue. The rumors among the passengers was that a man in first class would not stop taking pictures of the plane / flight attendants, and the governor’s security team became concerned. About three hours after returning to the gate we were back on the flight and headed safely to Boston.

That’s it from Structure. Good event. Looking forward to next year.